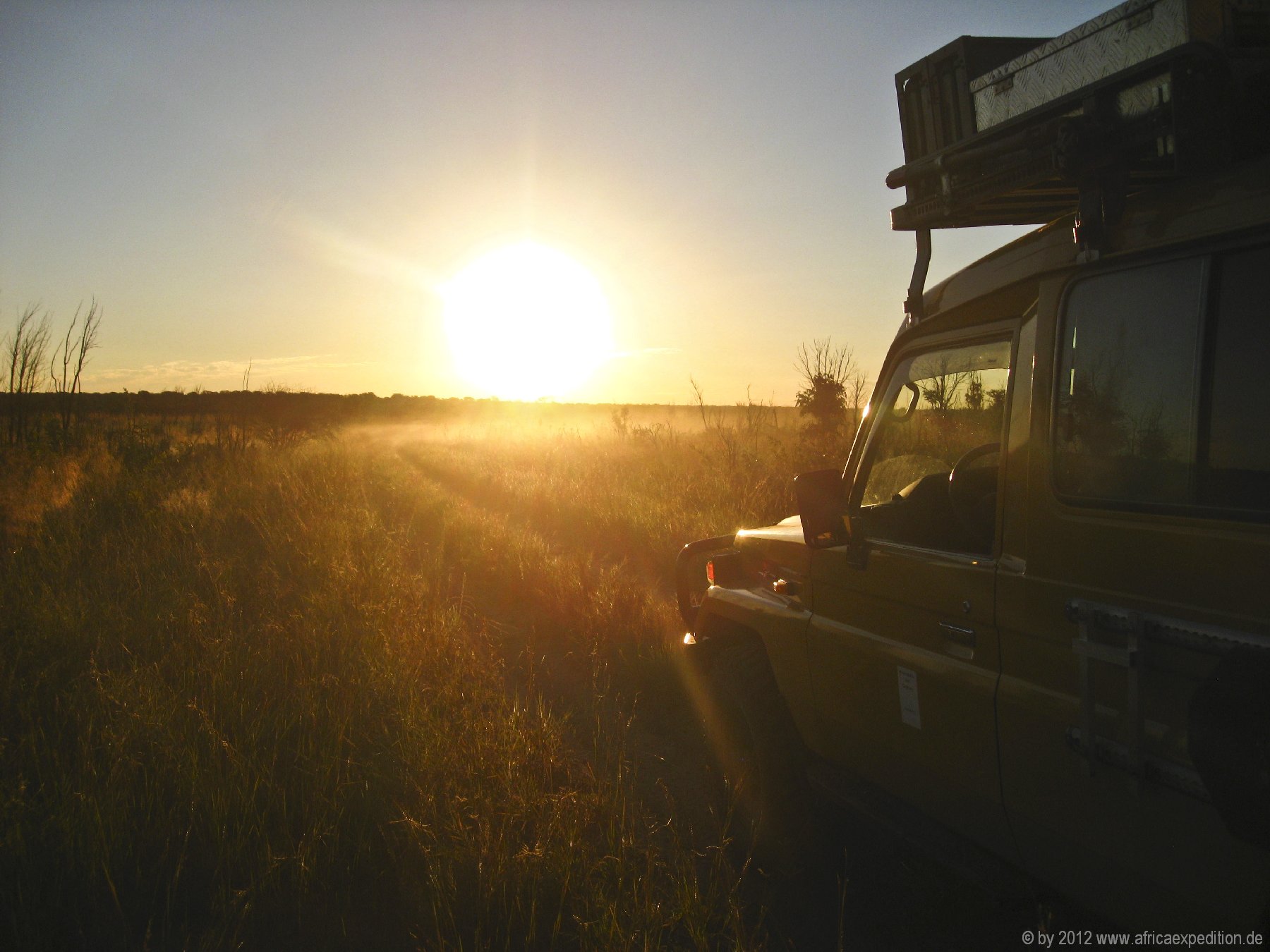 Zimbabwe, once the economic African paradise that is now almost run down. A dream land of natural resources, fertile grounds, diverse beautiful national parks as well as service orientated and creative people. Zimbabwe, a political disaster without any future prospects for the population.

As expected the border crossing to Zimbabwe was done quickly, and we drove to Victoria Falls village in order to see the 400-meter spray from a distance. Apparently the best spot offers Victoria Falls Hotel, and we also agree with it. The view from the hotel terrace was spectacular. We enjoyed the spray shimmering in rainbow colors over the connection bridge of the two countries, Zambia and Zimbabwe. Unfortunately one night in the traditional colonial hotel would have been way too expensive for us therefore we were happy with “high tea” in the afternoon. The village Victoria Falls has craft shops or markets at every corner with art collections from the entire country. The Zimbabwe people are big art masters in African stone and wood sculptures, and they produce something creative out of every material or fabric.

The next day we drove to Hwenge National Park and stayed at Sinamatella Camp (GPS coordinates S18 35.139 E26 19.101) on top of a hill with a fantastic view over the untouched wilderness. As the campsite was not surrounded with fences, we had to be prepared again for some visitors at night. However we only heard the lions and elephants roaring from a distance. Hwenge National Park is known for its huge herds of elephants, and we were lucky. When we woke up, we saw already a big herd grazing further down the hill. And when we were cruising around, many more Elephants were walking in front or next to our car every couple of meters. It must have been the elephant’s special walking day. The next day we were sitting on top of our Toyota for a “sun downer” watching lots of hippos and big crocodiles in a dam. We could not believe that locals were fishing in this dam the next morning, standing until their hips in deep water without any protection. They must have been either very desperate or totally crazy to risk their lives. We stayed one more night at the Jambili Private Campsite (GPS coordinates S18 55.382 E26 53.221) and had a lovely evening with a couple from Dortmund.  Their Toyota is parked in Namibia, and they travel in Africa every year for three months.

After four safari days, we took a driving break at the campsite World’s View Campsite (GPS coordinates S20 30.146 E28 25.575) at a Farm close to Bulawanyo. The view from there to Matobo National park was indeed stunning, especially now during the cooler season. The colors were amazing because of the changing of the leaves (it felt almost like autumn at home). We were very surprised to be welcomed by a white farmer and asked him immediately how he managed to still keep his farm. Sadly, he is one of the very few white farmers left in Zimbabwe. Apparently one advantage is that his farm is located closely to the tourist spot Matobo National Park and the other one is that he does not grow anything. However, he spoke secretly, and he really hopes that he will not attract any attention. Approximately 200 farms have been expropriated only few years ago and in the meantime their land is almost deserted.  The farm ground is dried out and nothing grows anymore. We suspected that President Mugabe must have given these farms to friends or relatives that did not have any clue about agriculture.  As Zimbabwe is now producing very little basic food, everything has to be imported expensively from South Africa. The prices are incredibly high and not many people can afford this. A lot of people are unemployed and maybe this is one of the reason why poaching in National Parks is increasing enormously, and the wild animals are getting less and less. The world view farm also has serious problems with poaches about once a month.

After two cold nights at the world view campsite, we visited Matobo National Park. Matabo is known for their well-kept cave paintings which are approx. 60 000 years old. In addition, Matobo is a very spiritual place, the old Bushmen visited regularly in the old days. Furthermore the park offers a lot of beautiful walking trails (but also with a lot of snakes). Only few tourists visit the park and it felt like we were the only visitors until we met surprisingly a German couple from Freiburg at a cave. Their Landcruiser is also based in South Africa and they travel with it several times a year through Africa. We could not stop exchanging stories and experiences and therefore decided to camp together at a lake with a spectacular view to the balancing rocks.

Our next destination point was the Great Zimbabwe Ruins from the 13th century because they were conveniently on our way to Mozambique. We were impressed by the well-kept stone walls, and we enjoyed especially the view from the king’s balcony on top of the mountains. Surprisingly at the attached Great Zimbabwe campsite (GPS coordinates S20 16.290 E30 55.843) we met the Swiss family we had exchanged many emails before our Africa departure in October. The Swiss family had left in July and drove almost the same tour as we did (however they could still drive through Syria). They have two lovely kids with the age of four and six years and the entire family looked so relaxed and happy. They enjoyed like us every single day of their trip. This also confirms that a journey like that can easily be done also with children.  Of course, their small converted travel truck offers much more comfort than our Toyota.

We continued our way to the (at this time of the year) very cold Zimbabwe mountain area Vumba Botanical Reserve (very cold means for African countries 25 degrees during the day and 2 degrees at night – at least always sunny. However, we slept in our roof tent and were freezing!). We drove through beautiful landscapes that almost looked like a jungle with huge African trees and wonderful flowery plants. This area must have been a posh tourist area for rich people during Zimbabwe’s former economic heights. We could only guess how wealthy the country was by looking at these incredible, luxurious villas and hotels.  As we were craving for warmer temperatures, we only stayed for one night at the Ndundu Lodge and Camping (GPS coordinates S19 07.089 E32 46.548) and were heading off to the Mozambique border the next day.

In the entire country, the campsites and accommodations looked a bit run down. Because of the unstable political situation, there was no tourism at all for years. In the meantime the number of tourists is increasing, however it is still very low.  This might be because in some countries there are still travel warnings for Zimbabwe. Additionally, we heard from many people that successful enterprises will be immediately expropriated and therefore everyone is trying to keep their property on low standard. Furthermore, some nations do really have difficulties travelling through Zimbabwe. For example, South Africans were telling us that they had to stop at each police check point in order to get checked at every single part in their car and afterwards they had to pay a lot of bribe money.  We did not even have to stop once at the check points. Another thing we also noticed immediately was that how well-trained, clever and quick the people were. Zimbabwe was not only economically the most successful country but it had also one of the best education systems in Africa. We had many conversations with locals, and we could tell how desperate and helpless the people are. Hopefully the political situation will change soon that the population will be able to get some future prospects.