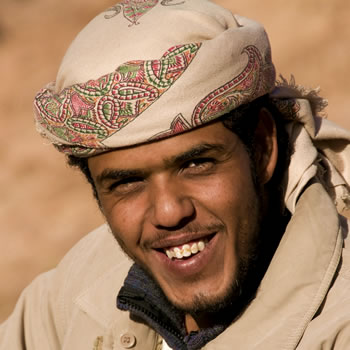 After we managed to finally board in Aqaba at 01:30 h in the morning, we had to go immediately on the ferry through the Egyptian pass control. Luckily an employee offered us to stay at the VIP lounge for the night. Great! This was such a relieve because the economy class was overbooked, loud and very smelly. Therefore we spent the night peacefully sleeping on white comfortable leather sofas. When we woke up in the morning we were already in Nuweiba. We only realized few days ago when we were reading the newspapers that we were even luckier. The ferry we took from Aqaba to Nuweiba caught fire in the boot only one week later. Almost no one got heart however our beautiful Toyota Landcruiser would have surely been damaged badly.

The Egyptian border is very well known for making troubles. However our entry was relatively stress free.  A so called Tourist Police officer supported us with all administrative duties like entry form, insurance, customs paper and other forms. After one hour and paying 1200 LE (approx. 150 Euro) we were already out of the harbor. The first stop was again a petrol station. We could not believe that we only had to pay 0,19 Euro per liter diesel. From there we followed a travel guide recommendation and drove directly to the beach resort “Soft Beach” in Nuweiba (GPS coordinates N29.02283 E34.67382). And indeed it was good: clean, nice beaches and delicious food for little money. They even had internet, therefore the perfect place for us to get all important things done and organized for the next few days/weeks.

After spending four days at the sunny beach with delicious food and a lot of work on the computer we drove to Catherine Monastery on the 2nd of November. On the way we passed several police and military checkpoints without any problems. We left out the off-road tours through the White Wadi, because we did plenty off-road driving in Jordan.  We stopped directly at the Catherine Monastery. Katherine’s Monastery (GPS coordinates: 28° 33′ 21″ N, 33° 58′ 32″ O) has an altitude of 1500 meters and was established between the 548 and 565 century. The monastery today is run by Christian orthodox. Only some parts of the monastery are open for public.

We booked ourselves into the Farag Fox Camp (GPS Coordinates 28º33,85689’N, 33º57,50381’E) which is run by Bedouin’s. We can only recommend this place: beautifully situated, friendly people and interesting conversations at the fire place. In the afternoon the Bedouin’s included us in a medical camel treatment procedure. The general medicine did not work for this camel therefore the Bedouin’s used their traditional remedies. Firstly they cleaned the tongue with a cloth and a stone and then the entire mouth was rubbed with salt. At the end the camel was brand marked deeply three times on head and neck with a burning iron stick. The camel was totally fine with the torture remedy and felt better immediately – unbelievable.

On the 3rd of November 2011 early in the morning at 02:00 am we left for Moses Mountain together with a guide in order to watch the sunrise in the desert mountains.  The night was freezing cold. When we left the bright village behind us we were surrounded just by darkness, silence and an unbelievable starry sky. We started the tour on a deserted path that is only used by locals during the day – therefore far away from big tourist groups. Unfortunately our deserted path was linked together with the Catherine Monastery path the last 750 steps. And here you go, there were the masses of tourists climbing up with slippery shoes and improper equipment. No wonder that we could only do the rest of our tour very slowly like in snail paste. Nevertheless climbing up Moses Mountain was worthwhile because the first light of a rising sun is magical. And so were the photos we took.

An exceptionally beautiful and unusual house directly next to our Bedouin camp caught our attention when we arrived. The owner of this house is a German guy called Cosmos. Cosmos, a former Beuys-student walked all the way with his wife Irma and two donkeys from Cologne (Germany) to Jerusalem (Israel) and finally to Catherine’s Monastery (Egypt). It took them 10 years from 1997 to 2007!  Next to the Bedouin camp beautifully situated they decided in 2007 to settle down and to build a house. He told us his amazing story in the afternoon while we were filming him. Please see also his interesting story on his website: cosmos-damian-factory.org

Later in the afternoon we also interviewed Dr. Hilary Gilbert. She is the founder of the South Sinai Foundation and she told us about her work and her daily challenges.  The South Sinai Foundation helps to improve the life and status of the Bedouin’s with small development projects. Her projects include: education, health, sustainable development and job creation, conservation of environment and heritage.  Please see more information on her website www.southsinaifoundation.org

On the 4th of November in the morning we left our Bedouin Camp and drove towards Cairo. We spent the night in the dessert in our roof tent because the only camp ground in this area resembled rather a rubbish dump. We arrived in Cairo the next morning after passing again thousands of police and military checkpoints. In Egypt there are always two checkpoints in each village or military institution (at the beginning and at the end). Luckily we could continue immediately as soon as the police officers realized that we are German nationals. We wanted to go to Cairo in order to get the Sudan and Ethiopia visa as well as confirmations from the German Embassy. Therefore we stayed at the “May Fair Hotel” right in the middle of the embassy area in Cairo. The Hotel is neat and clean (for Egyptian standards) (GPS coordiantes: N30.05941 E31.22102) .

And further stories in our next blog that will come soon….