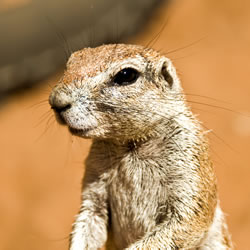 The border crossing in the connecting National Park Limpopo/Kruger of the two countries Mozambique/South Africa was very pleasant because the clearance was done in two little isolated huts. Luckily Kruger National Park compensated for the missing animals of Limpopo National Park within a couple of hours. We were surprised by getting to see the whole range of wild animals even from a very close distance. The negative part was just that we had to share the pleasure with a lot of other visitors. Also a bit shocking for us were the campsites. They almost offered the infrastructure of a small town and were made for masses of tourists. For example there were gas stations, ATM’s, a well-stocked shop, medical treatment, etc. No wonder that every campsite space was occupied and we had to park somewhere in the middle. However this spot offered the best view for camper watching. The first thing our temporary South African neighbors did at their arrival was cleaning their car because there was a bit of dust on it. Afterwards they swept the floor in order to build up their fully equipped kitchen for hours. This reminded us very much of the weekly cleaning service in Stuttgart and was far away from being in nature. What a difference to other African countries. Not to forget to mention that the whole campsite resembled a high-security wing.  A high electrical fence with a well prepared security service protected the camper from “wild animals” around the clock.

After two days Kruger National Park we visited our friends Sabine and Joe with their kids in Johannesbourg. Also in Johannesbourg people live behind electrical fences with highest security standards. The “white” people from Johannesbourg only move around in these fenced areas. Additionally they never stop at red traffic lights at night. We did not drive at all at night then. On one of the main roads close to Johannesbourg a traffic sign warned us about violent attacks in this area and we should not stop under any circumstances. However we did not notice anything unusual. The fenced “gated communities” offer every single convenience e.g. secure luxurious accommodation with lakes, hills, tennis courts, walking and jogging trails, etc. as well as a shopping paradise just around the corner. What a difference to the corrugated iron huts in the townships that do not allow only one additional breath. It was a pleasant change for us to live in a house again even though we really enjoy travelling with our car. We were especially spoilt from Sabine with the best cuisine ever. Thanks again to our friends.

After this nice break we drove to Kalahari Gemsbockpark. This is a trans-frontier park of the countries South Africa, Botswana and Namibia. We drove through wonderful landscapes on the South African site and arrived at one of the most adventurous campsite at the Botswana site which was exclusively reserved for us alone. Only a little sign in the middle of the most beautiful nature stated that we were at the right place. There were neither toilets nor showers or running water and luckily no fences. We did not mind at all because our Toyota is fully equipped even with a bush shower. We just needed to watch out for Lions or Leopards. The return trip over the northern track was compulsory for to two cars because of security reasons in the event of a car break down. Hardly anyone drives on that isolated deep sand road and there would be no help for weeks. However we convinced the responsible guy on the Botswana side to let us go alone. After all we drove through all the African countries without any difficulty and the 100 km off-road was an easy game.  One more time we camped in the middle of the wilderness with a marvelous view over a pan. We saw herds of wildebeest, buffalos and Oryx’s grazing peacefully. That was pure nature.

Unfortunately the Nossob (GPS coordinates S25 25.320 E20 35.770) campsite on the South African site was again far away from being in the wilderness. Similar to the Kruger campsite Nossob offered a well-equipped infrastructure. What a difference in one single national park but different countries. Of course the popular electrical fences were not missing either. Apparently South Africans only feel comfortable in electrical gated areas.

The next morning we drove to Mata Mata in order to enter Namibia and to leave the Kalahari Gemsbock National Park. Our Carnet was already stamped out at our arrival at Two Rivers Entrance Gate on the South African Site.