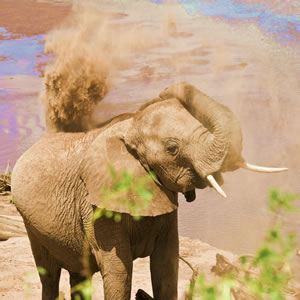 Welcome to the wild East Africa! Breathtaking Landscapes, stunning sunsets and our first elephants. From the rough North along lake Turkana, the Samburu National Park and Mount Kenya to Nairobi. Continuing to Lake Naivasha, Lake Bogoria National Reserve all the way to Uganda.
At the beginning of the New Year we entered Kenya driving from Tumi,  Omo Valley to the east side of Lake Turkana. We drove on small sandy roads, deep washed-out river beds, passed by little villages and crossed the border from Ethiopia to Kenya at lunch time.  As expected there were no customs, not even a police station – just nothing, except beautiful landscapes. Few kilometers before Ileret we set up our camp right next to the road. Locals walked peacefully along the street und greeted friendly. No one stared at us or begged for something. Wonderful! Shortly before going to bed some local guys stopped by and chatted nicely with us. What a difference to Ethiopia!

The next morning James and Dee as well as Igor and Johannes met us again. They only camped 500 meters away from our car without noticing. For the biker guys the tour was very exhausting as the roads consisted of deep sand alternately to rough lava rocks. The two of them fell off their bikes several times and even hurt themselves. But they were tough and went through. In Ileret we got registered at the Police Post and went further towards Sibiloi National Park. As we did not want to visit the Sibiloi National Park nor paying the fees we just drove on the roads outside the park. Right before Derate we bush camped once more. And this time there was not only one single person, just us and some foxes stoped by at night.  In Derate we filled up our water tanks at a well (GPS coordinates: N3 51.118 E36 31.147).  Unfortunately there were no signs and we drove straight to the main gate of Sibiloi National Park. What a shame. The rangers at the main gate wanted to charge us 45 USD even though we only drove the last 6 km through the park. As we were still not willing to pay and we did not want to drive all the way back with a big detour we decided to go off-road for about 10 km to get out of the park. And this was the wildest off-road we have done so far. Our track went right through the bushes, through a hilly rocky forest and then (that was the most challenging adventure) through an out-washed riverbed that consisted of deep sand alternately to awfully big steep rocks. We must say, our Landcruiser did very well without any complaints. On that evening we rewarded ourselves with a fantastic bush shower under a beautiful acacia and a delicious dinner. From there we drove along lake Turkana to Liyongalani. We bush camped once more directly at the lake. This time, some local tribe people stopped and chatted with us friendly. The lake Turkana route had a stunning scenery however the rough roads (if we can talk about roads) made it really difficult to drive. We could mainly go in walking speed on the sandy tracks that took turns with rocks and deep potholes. In addition it was incredibly hot. The temperatures reached up to 44 degrees during the day however 28 degrees during the night. At least it was the perfect temperature to sleep. In order to avoid biggest heat we started at 06:30 h in the morning and were totally exhausted in bed latest by 20:00 h.
In Liyongalani we went straight to the Palm Shade campsite (with beautiful grass on the ground, clean toilets and cold beer!) (GPS coordinates: N2 45.385 E36 43.258) We really enjoyed some kind of civilization after for four days of wilderness. In the Palm Shade we met the photographer Neil Thomas and his girlfriend (www.neilthomas.com). He is currently working on a photo collection book of the lake Turkana tribes and he did many photo shootings. He was kind enough to take us with on the second day and we really enjoyed ourselves directly at the shore of lake Turkana. We also got some beautiful pictures. Thanks again Neil!

After a two days break we continued our journey to Maralal. We visited the children’s home “Springs of Hope” on our second day and reported about it. Please find the detailed story as well as pictures and video attached. Taking this project as an example, we realized that development aid should preferably be initiated locally in order to guarantee efficiency and sustainability. At least it increases the success of the project. We placed the project on „betterplace.org“. It is about to take on more kids from the street. Ten children are already on waiting list and many more need a home. At this stage we would like to ask you to have a look at  „betterplace.org“. You can become a supporter by writing a positive message (that does not cost anything) or better, you could donate some money. If everyone donates just a bit we can really make an effort for the kids. www.betterplace.org/de/projects/8641
On the following day we continued our journey from Maralal through beautiful mountain sceneries to Samburo National Park. We visited the park the next day and were quite shocked about the entrance fees (they charged 70 USD per day and Person + 15 USD for the car). As least we saw a lot of giraffes, antelopes, zebras and wild pigs.  However watching several big herds of elephants taking a bath and cooling themselves down during lunchtime was our highlight for the day. Unfortunately the lions were hiding successfully the entire day.
We spent the following two days at Mount Kenya with fantastic food and we had a lot of time for reading and writing at cool temperatures. We saw the snow covered Mont Kenya only from far away because a guided tour would have been 250 USD per person and that was definitely too expensive for us. The following four days we were handing out in Nairobi. Nairobi was packed with updating of the blogs, shopping (Nairobi has beautiful shopping malls, they are all packed with European food we are used to), stamping our passports and beautiful food. We stayed at Jungle Junction Campsite (GPS coordinates: S1 17.327 E36 45.636) and as a nice surprise we met Susi, Mark und Tom, as well as Igor und Johannes again. Even though we liked Nairobi very much we had to go on tour again after four days.

After Nairobi we were heading directly to Fisherman’s camp (GPS coordinates: S0 49.548 E36 20.095) at lake Naivasha. A beautiful campsite under big trees directly at the lake welcomed us. In the afternoon we discovered the lake by boat together with three South Africans (we had already met them at Jungle Junction). Only few meters from our campsite we saw the first hippos and right next to them were some water buffalos grazing on a little island. The next morning we drove to Hells Gate at 06:30 h in the morning this time on mountain bikes together with the South Africans.  It was a special experience watching wild animals (there were only zebras, giraffes, buffalos, wild pigs and antelopes) from very close and racing against each other. We especially enjoyed the bike ride after so many kilometers just sitting in the car. When we woke up the next morning our tent was surrounded by a lot of marabous all looking for food. The big birds have a wingspan of approx. two meters.

After lake Naivasha we drove to Lake Bogoria National Reserve and (what a surprise!) we had to pay again 50 USD entrance fees. Kenya got incredibly expensive the last years. Even the smallest lake or mountain was turned into a National Park or National Reserve in order to sell the ticket expensively to international tourists. Lokals only have to pay a fractional amount. As we will be able to see many more wild animals on our journey we decided to cut down on the minimum in Kenya.
Nevertheless lake Bogoria was an amazing natural spectacle. We stayed at the Fig  Campsite (GPS coordinates: N0 11.545 E36 07.371) which consisted only of big fig trees (directly at the lake), many monkeys and a fireplace. We were totally alone again. The next morning we did a nice walk through the bushes along the lake to the hot springs. It was bubbling and steaming everywhere. On the west side of the lake there were thousands of flamingos. They felt a bit disturbed when we got closer, but luckily through that we got some great shots from colorful flying birds.
Outside of Lake Bogoria National Reserve we camped at a Bogoria Spa Hotel with swimming pool (GPS coordinates: N0 21.268 E36 03.114). Also on this campsite there were many Marabous, Ostriches and monkeys. It was a pleasure watching them during breakfast. However the monkeys were a pain in the as! Firstly a monkey stole a banana from a box in our car (but that was just funny). Secondly a group of monkeys took apart the garbage and distributed the smelly stuff on and next to our car. However the absolute highlight was, that we woke up at 05:00 in the morning from a splashing noise on our roof tent. In the first moment we thought that it started raining. But no way: A monkey was sitting comfortably on a tree and was peeing and then shitting right on our tent. How lucky we were that we just put up the rain protection one day earlier. Not imaginable what otherwise would have happened. Since then we are not friends with monkeys anymore and we keep them far away.
After we cleaned up we continued our journey over beautiful mountains towards the border to Uganda. We had to stay one more night at a backyard of a guest house. There were no campsites around and bush camping was not possible because there were too many people living in this area.
Altogether we can say that Kenya has beautiful landscapes and additionally we also liked the Kenyan’s very much. The people were very friendly, funny and respectful and everyone spoke very well English. The school system in Kenya is well developed. It is for free for all the kids until the ninth grade. Only books, school uniforms and exercise books need to be financed individually. We saw a lot of school signs all over Kenya and we were deeply impressed.