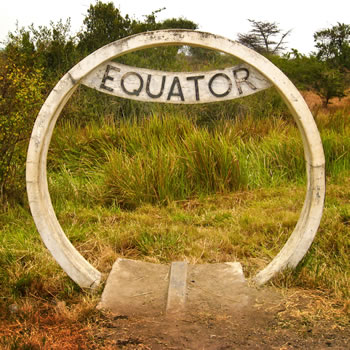 From Jinja at the Nile River to Kampala with the worst chaotic traffic, continuing over the highlands of Fort Portal with charming crater lakes and further South via Lake Bunyonyi to the Rwandan border. After the last really hot days at Lake Bogoria in Kenia we passed the boarder to Uganda at Malaba on the 23rd of January. We were welcomed by friendly people, rich vegetation and pleasant temperatures. If someone thinks of Africa, he probably imagines a country like Uganda: stunning nature with colorful tropical plants as well as smiling people on the roadside. These were the first impressions we got from Uganda.

Our first stop was Jinja. Jinja is situated directly where the Nile drains off Lake Victoria. And right at the Nile river few kilometres down the stream is one of the most beautiful campsites in Africa “The Haven” (GPS Coordinates N0 32.564 E33 05.387). The Haven overlooks the Nile rapids and is run purely by solar energy.  We rather felt like somewhere in Switzerland and not in Africa because it was so clean and tidy there. We spent the next day’s with writing, checking out the area and just relaxing. We had to recover from the exhausting journey.  The peaceful days were only interrupted by a rafting tour. One full day we were speeding down the Nile rapids and at the end we flipped over. That was great fun.

We also used the time to remove the damaged steering damper of our Toyota and to look for replacement. On the third day Dee, James together with their friend Collin, who lives in Jinja, came unexpectedly to “the Haven” for dinner. That was a big surprise and we were very happy to see each other again. What a coincidence that Collin has a workshop for Landcruisers. That was really lucky because the next day Julian together with Collin removed the suspension for the steering damper, straightened and welded it. That saved us a visit at the car repair shop, hence a lot of money. We only had to buy the heavy duty steering damper spare part in Kampala and inserted it by ourselves. At this stage we would like to highlight that our Toyota did not have any problems so far. The car is just perfect and drives and drives and drives, no matter if there is deep sand, lava rocks, 4000 meters altitude or 44 C boiling heat in the desert. We are very happy about that.

In Kampala we stayed at the Red Chili Hideway Camp (GPS coordinates N0 19.208 E32 37.800). Red Cili is a overlander hotspot with a lot of overland trucks, loud music and very good pizza. There we saw also Ali again; we met him the first time in Nairobi. He came with his girlfriend Mariska, who works for the NGO Foodstep. Mariska told us about the many unsolved problems in Uganda as well as her work at the children’s prison Kampiringisa. That caught our interest for our next project visit. As we were only allowed to visit the prison on Thursday we had to stay the next days in Kampala. Even though Kampala is a smelly, totally polluted and overcrowded city and it has the worst chaotic traffic we were quite happy that we stayed longer. We saw a different site of Uganda we normally would not get to know as tourists.

In the children’s prison Kampiringisa are approx. 300 kids from three years to seventeen years. These are mainly street kids and they are unfairly and unjustly imprisoned. The conditions in the buildings are awful and unbearable. The children do not get any school education, training or medical treatment. Further details and the background of the project will be published under FOCUS AFRICA shortly.

From Kampala we went further via the highland of Uganda to Fort Portal. There we stayed at Kluges Guest Farm (GPS coordinates N00.594857 E30.247947). It is really a nice spot.When we arrived there we were immediately invited to Stephan’s belated 60. Birthday party. We celebrated a great party at a big campfire until late night. At this place we would like to say thank you to Stefan for his invitation! Unfortunately Viktoria did not feel well the next days. She had a headache, fewer, was vomiting and had diarrhea. Initially we thought about an upset stomach, therefore we only went to the hospital on the third day. However the fewer that went in the meantime up to over 40 C was obvious and the blood test confirmed the result – Malaria! Viktoria had to take a vast amount of tablets and hat to stay in bed for two days. Luckily she felt much better after two days and the fewer was gone. What did we learn out of this: Next time we will go immediately to the hospital and don’t wait!

For a change and to fully recover we moved in between to the Nkuruba Nature Reserve community campsite (GPS coordinates N0 31.119 E30 18.133) directly at the crater lake Nkuruba. The campsite is beautifully situated and is viewing the lake. Apparently the lake is bilharzia free therefore Julian swam several times in it. The area is covered with these crater lakes which offers a beautiful natural spectacle. As Viktoria felt strong enough after four days, we continued our trip towards Lake Bunyoni. In between we stayed one more night at the Nyanzeebiri Community Campsite (GPS coordinates S0 15.653 E30 07.365) again directly at one of the crater lakes.

Like on the trip from Kampala to Fort Portal we also drove on this trip from Fort Portal to Lake unyoni through a lot of forest fires. The locals burn not only the rest of the harvest, but also the last beautiful forests. There was thick smoke everywhere.Even Elisabeth Nationalpark was burned down half and totally black.

Not only the guide book writes, that Lake Bunyonyi is the most beautiful lake Uganda’s, we also can confirm that. This might also be because we found a wonderful Campsite, called Lake Bunyoni Overland Campsite (GPS coordinates S1 16.341 E29 56.243). Our car was parked directly at the shore overviewing the lake from both sites.

Nonetheless we drove to the Rwandan border after two days. The border crossing was very easy for us Germans, as we did not need any visa. After 45 minutes everything was done and we were already on the Rwandan site.

Altogether we can say that we really enjoyed travelling in Uganda. Uganda has not only a beautiful landscape but also the people are very friendly and helpful and we always felt safe. The kids were always waving at us excitedly and calling us happily “Mazungu” (white person).