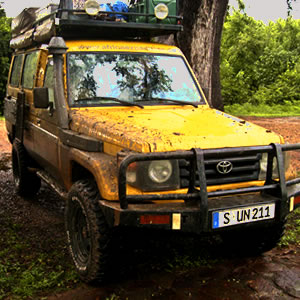 Zambia, a huge country with warm hearted people.  An untouched African spot on the way to find access to international markets. A country in the dilemma between traditions and free market interests.

When we crossed the border to Zambia we also noticed here how friendly the people are. No helpers, no money change shouters, only efficient handling. We were immediately out of customs after we got a visa, the required stamps and paid the carbon emission tax for our Toyota. Firstly we went to the ATM and then to the filling station. How relaxing life can be if diesel is available again at all filling stations!

From Chipata we drove north-west to the South Luangwa National Park.  There are no campsites in the park therefore we stayed directly at the National Park at the Luangwa River in the Croc Valley Camp (GPS coordinates S13 06.010 E31 47.644). At our arrival the campsite manager warned us immediately not to leave any fruits like mango’s, oranges etc. in the car. It happens very often that some elephant’s walk into the campsite and smash everything into pieces in order to get the delicious fruits. Luckily we put everything immediately into our fridge because at sunset one elephant swam across the river and came to our campsite.

Early next morning we entered the National Park. Unfortunately after the first hundred meters it started to rain and with that the probability dropped a lot to see wild animals. Apparently also during rainy season the park is known for a spectacular fauna. But we realized that all animals are hiding away during rainy days (of course apart from crocodiles and hippos). Nevertheless we did not want to give up and continued our way to the north on the well prepared main roads that were covered with red stones. The side roads were impassable because the black soil transformed the track into incredibly slippery mud only with few drops of rain. Apparently the street workers must have run out of red stones because without any warning the well prepared street turned suddenly into the feared slippery black mud soil. It felt like ice rain back home! Our Toyota skidded and ended up in an over flooded mud ditch. And here again; we were standing totally alone in the pouring rain. However this time the conditions were a bit more challenging than in Rwanda: there were no Rwandan helpers and there was a slight probability that a wild animal might get close to us. It is actually not permitted to get off the car in the National Park but we did not have any other choice. The car would not move anymore and there was no help from someone else to be expected for the next couple of days. We could not help but rolling up our sleeves again and started digging. Nasty biting ants and disgusting worms were crawling up our legs, but no matter what we had to continue. And in fact it was worthwhile: after almost two hours of working heavily we were ready to go and managed to get the Toyota out with a lot of power. What a relief!  As we still did not want to give up we drove towards south searching for some animals. However the street conditions were really bad. The roads were either flooded or covered with the feared black mud soil. Fortunately we made it without getting stuck again but that was only with big luck and some skills. At least at the end we saw some animals.

After one day break and cleaning we continued our journey. We wanted to take the road directly along South Luangwa National Park however a British guy stopped us after 15 km. He said that even though the landscape is very beautiful, we can only take this road during dry season in July or August and ideally with two cars.  Only few cars can make it alone in dry season but the road is impassable during rainy season as the rivers are flooded. The British guy and his wife live in the middle of the forest at South Luangwa National Park and founded a small NGO some years ago. The project is mainly about preservation of flora and fauna in the South Luangwa area. Poachers are harming the National Park sensitively and tree chopping for fire wood or charcoal outside the park makes the surrounded forests and its old trees more and more shrink. The British couple is creating awareness among the population and they educate young children already in school. The project is solidly sustainable and was awarded with the World Prize for Sustainable Energy of the European Parliament Science and Technology Options Assessment (STOA) Panel. Please have a look at their website for more information  http://chipembele.org/.

As we did not want to run the risk to get stuck on this road until July (in spite of the beautiful landscape), we turned and used the main road to Lusaka. In Lusaka we had to run some errands and noticed immediately that we were getting closer to South Africa because the variety of goods was almost like at home – however the prices were incredibly high. We haven’t found out yet how the locals can afford these products because their average income is really low. We drove 15 km outside of Lusaka to stay one night at the Pioneer Camp (GPS coordinates S15 23.732 E28 27.045) in the middle of the forest. It was really worthwhile to drive out of the city to this idyllic place.

Our next stop was the farm Moorings Campsite (GPS coordinates S16 11.624 E27 32.600), which is conveniently located between Lusaka and Livingstone (Victoria Falls). The core product of the farm is maize in addition to their pigs and cows. We met the Swiss couple Tatjana and Michael. They started travelling through Africa six years ago and settled down on the farm about three years ago. We heard interesting and exciting stories of their experiences.  The campsite is one part of the farm and is usually quiet and peaceful. However when we arrived there on Good Friday we were surrounded by drumming and happy singing. The local farm workers with families and relatives celebrated the Easter holidays with singing, dancing and drumming almost continuously from Good Friday to Easter Monday.  We walked on the farm several times and as we were curious we participated on a service at their farm church on Easter Sunday and took a video of their activities. The locals were happy to see us and integrated us immediately into their community. Luckily we did not need to sing.

After the Easter holidays we drove to Victoria Falls in Livingstone. Sambesi River has grown to a huge raging torrent during rainy season and we were very impressed to see the masses of water plunging 110 meters down the rocks over a width of 1708 meter. However we were not able to see to the ground because of the up to 400 meters high spay that looks like fog. The Spray is visible even from approx. 30 km distance. We were drenched immediately by the spray and it felt like a tropical rain shower. It was great fun to wander along the falls and to cross the bridge on top with the best view point. After we were dry again we drove immediately to the Zimbabwean border, which is right behind Victoria Falls. As the entire area around Vic Falls is very touristy we did not want to stay one night longer on the camp site. Besides the fact that we were fed up with the helicopters, that were continuously cruising around and making terrible noises. The helicopters offer tourists a beautiful Vic Falls view for 15 minutes.

We enjoyed Zambia a lot in spite of rainy season. The country has everything to compete with the international market. It has many mineral resources, a variety of great national parks in every part of the country and a beautiful landscape. Additionally the people are warmhearted and friendly. Nevertheless we very often felt like we were still in an untouched African country. We can only recommend Zambia as a travel destination.