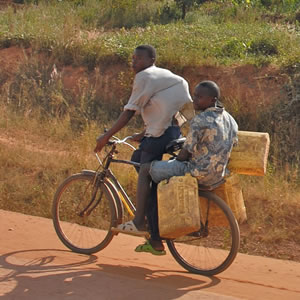 Greetings from the cleanest county in Africa which is also called “land of thousand hills”. Apart from the very well-known movie “Hotel Rwanda” people at home know very little about Rwanda. Although Rwanda such a wonderful country is and absolutely worth visiting. The border crossing from Uganda to Rwanda at Kartuna was once again hassle free and quick. There was some kind of Babylonian confusion at the border strip between the two countries because there is left-hand traffic in Uganda and right-hand traffic in Rwanda. We got our passports and the Carnet de Passage stamped (all for free for Germans) at the Rwandan border and were already done. No annoying helpers, no waiting queues just friendly helpful people. The journey to Kigali went also very fast on new roads.

After driving the first few kilometers in Rwanda we noticed immediately that the traffic became less and less. In addition we saw no more white faces. From all sites the children shouted happily “hey Mazungu” (like in Uganda). Apparently they do not see so many white people. Some of the streets are even better than in Germany and the entire country is super clean – even Switzerland cannot keep up with it. Some of the reasons might be that it is prohibited to import, sell or even use plastic bags. Further more people get sensitively punished for littering. On Saturdays are the anyway almost empty streets deserted because every single citizen has to do “community work”. Everyone, even the president, has to clean streets as well as to repair or tidy up the environment.

We reached Kigali, Rwanda’s capital, already at lunchtime. Like to rest of Uganda, Kigali is also placed on thousand hills. Kigali is small, clean and efficient and motor bikers have to wear helmets (that is very unusual in Africa). We stayed at “One Love and Camping” (GPS coordinates S1 56.904 E30 04.501) which is according to our information the only campsite in Kigali. Unfortunately it is not suitable for overlanders because the campground is not reachable for cars. Therefore we had to camp at the parking and that was not very pleasant. At least we got free internet after weeks again and we were finally able to do our online updates.

In order to get the gorilla tracking permit (to really expensive costs of 500 US Dollar per person – and from June onwards it will be 750 USD!) we were looking for the ORTPN office in Kigali. However the office moved (the website has not been updated) to the Rwanda Development Board (RDB) Building (GPS coordinates S1 57.148 E30 06.175). Unfortunately we only got one permit applicable in five days. Everything was fully booked for the next few weeks. We run the risk because we expected getting the second permit at the Volcanoes headquarters – and we were lucky.

As soon as we got the permit we drove to Lake Kivu in the West. The beautiful scenery and the well-kept tarmac roads made up for the troubles in Kigali.  We found a nice place to stay at Hotel Holiday in Kibuye (GPS coordinates S2 03.260 E29 20.835). The place is not very cheap (like everything else in Rwanda) however we were able to place our car directly at the lake in the hotel garden and the bathrooms were clean. Unfortunately the first rain caught us there since Italy. After two relaxing days we drove under pouring rain to Gisenyi in the North of Lake Kivu directly at the border to the democratic republic of Congo (DRC).  We drove along the lake on an adventurous off-road track: on overcast mountains, through deep valleys, over wild rivers. It took us more than four hours to get to Gisenyi which is only 100 km away. We found again a brilliant place to stay at the Paradise Malahide Cottages and Campsite (GPS coordinates S1 44.028 E29 16.391). The only disadvantage was that we had to park our car again at the parking, but this one was placed a bit more pleasant. The hotel is situated directly at the lake and has a very nice atmosphere. The next day we drove from Gisenyi to Kinigi at the Volcanoes National Park. We spent three nights at the Kinigi Guest House (GPS coordinates S1 25.956 E29 35.906) which is only 300 meters away from Volcanoes Park Headquarters (GPS coordinates S1 25.941 E29 35.687). The gorilla tours start from there every morning. As we only got one gorilla permit we went there on two consecutive days and we were lucky as we got another ticket. The mountain tour to the gorillas was stunning. However standing face to face with a silverback (gorilla family head) and being surrounded by the playing mountain gorilla family is an unforgettable experience.

On the following day we were planning to drive back to Kigali. As the distance is very short we decided to make a little detour over the northern lakes Bulera and Ruhondo and further to Bururea. At the beginning everything was just perfect: a fantastic drive on relatively good roads. Unfortunately the streets got gradually narrower until they ended in one way roads. And in the middle of a beautiful landscape, between banana trees, stunning mountains and valleys it started raining. It poured down and transformed the narrow earthy roads to greasy slides. We could hardly believe but our GPS still confirmed that we were on the right track. In this moment we were very happy about our BF Goodrich MT tires. The path went further on slimmer getting bridges. These were anyway only made out of slippery tree trunks. Unluckily at one point we missed a turnoff without noticing and were standing in front of a narrow, damaged bridge. Our car could have never gone over that. We decided spontaneously and bravely to go directly through the little flat looking river. However we did not get very far – suddenly our Toyota got stuck in deep mud (over one meter) in the middle of the river. We could not even move one millimeter – neither forwards nor backwards. And here we go – we were standing in the middle of the river, totally alone, not a single body to be seen, only surrounded by nature. Yet luckily you are never alone for a long time in Africa. Mystically people appeared just from nowhere – one by one. In our case firstly about 50 people arrived and started immediately digging out the car as well as dragging some stones. Unfortunately our Toyota stuck really unluckily and deeply in the mud. After three hours of intensive digging and high-lifting we were still not successful. There was only one solution: We needed another vehicle to pull us out of the dirt. The next village with motor vehicles was about 15 km away, therefore Viktoria left on the back seat of a bicycle to get help. She could only reach the village at 16:30 because the streets were very bad and the mountains quite high. Once she was there she had to react quickly because she needed to be back with the helpers before sunset. However nothing can be done quickly in Africa. No one wanted to drive the virtually impassable roads.  An approaching nun had the idea to ask the Chinese street workers as they have the perfect vehicles and equipment. As always the Chinese smiled nicely and promised to help. However nothing happened after waiting for over one hour. It was already pitch dark. Finally Viktoria found a helpful Rwander, who was willing to drive the impassable road and to pull out the car.

In the meantime Julian and the volunteers kept on digging. As they found out after a while not only the wheels got stuck but the Toyota sat especially in the middle heavily on rocks and mud. After a couple of hours the number of the volunteers increased gradually to about 200 people. Of course this was the village happening of the year for them. But some of them were working very hard for hours with the high-lift, ropes and shovels. And then after five hours intensive preparations the Toyota was ready for the final – Julian stepped heavily on the gas and the Toyota was out. Yeah!!!  As it started getting dark Julian drove as fast as possible in order to find Viktoria. Unfortunately after a couple of hundred meters it stopped again. The roads were so narrow that the Landcruiser did not fit. On the left side it went steep up the hill and on the right side deep slopes of about 1.5 meters. The Landcruiser almost slid down the slopes. We as Europeans would just turn and try another solution, but our Rwandan volunteers. Without hesitating they started cutting down the eucalyptus trees in order to build a temporary bridge. And what a surprise, after half an hour the construction was ready. Even more surprisingly was that it was strong enough for driving over it with the heavy Toyota. After that Julian needed to drive through a cornfield over a little river and, over a steep hill in order to reach the other side of the valley. Luckily it went very well without any problems with four wheel drive diff-lock. Julian went all the way to Burera, in order to pick up Viktoria. Viktoria saw Julian coincidentally standing in the street because she was supposed to be on the way to rescue him.

After this real adventure we continued driving to Kigali, even though it was already pitch dark. We were planning not to drive in darkness in Africa, however we made an exception in Rwanda because the country is very safe and the streets to the capital are good. We reached the Discover Rwanda Youth Hostel (GPS coordinates: S 1° 57.044 | E 30° 05.592) totally exhausted but very relieved at 21:00 h. In the meantime we found out that there is a second campsite in Kigali. The next morning we cleaned our car from the mud. The dirt was everywhere in thick layers inside and outside and of course also on our clothes. In the afternoon we visited the Genocide Memorial Center. We saw horrifying pictures and reports. Even though we knew Rwanda’s history, we were very depressed when we got out of the center. As we got to know the people now a bit, it is even more difficult for us to understand that such a massacre took place in this country. But we do understand now better why the people seem to really stick together and live in a close community. They want to do everything in order to avoid that such a disaster can ever happen again in Rwanda.

The next morning we drove to the border of Tanzania.

We really enjoyed travelling in Rwanda. The rich green flowering nature in the middle of thousand hills is really an eye candy. The people are working hard nevertheless they seem to be happy and satisfied. The Rwandan people treated us very friendly with respect and were especially helpful. As we felt safe everywhere we can highly recommend traveling to Rwanda.