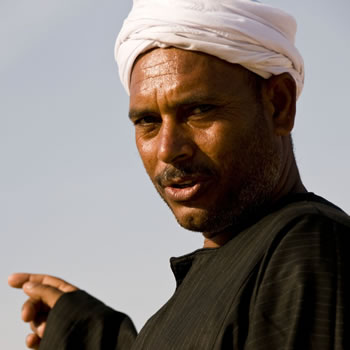 In summary we can say that driving in Egypt is like playing „Tetris“ in the street. There are no rules. Everyone drives the way he feels like and the winner is the biggest or the loudest car. A four line street is made to a six line street and vehicles drive only centimeters apart from each other. The traffic is packed with busses (always stopping somewhere), donkey wagons and millions of cars and motorbikes. But now one by one…

We booked a hotel room at the May Fair Hotel (GPS coordinates N30 03.565 E31 13.261) in Zamalek in located in the middle of the embassy quarter in Cairo. Very early next morning we went confidently and full of energy to the embassies in order to get the visas for Sudan and Ethiopia. When we arrived there the doors were closed and no one was working. Great! Not only Israel seems to have lots of public holidays but also Egypt. Or maybe it is us? Do we attract all the public holidays in the region? Because of the “Feast of Sacrifice” public holidays the Sudan embassy (GPS coordinates N30 02.371 E31 14.050) was closed for the entire week. The Ethiopia embassy (GPS coordinates N30 02.398 E31 12.279) for four days and the German embassy (for our Ethiopian recommendation letter) for two days (GPS coordinates N30 03.301 E31 13.134). What shall we do now? We decided spontaneously to stay in Cairo for four days for the Ethiopia visa and to get the Sudan visa later in Assuan at the consulate. We wanted to discover the city, museums and the surrounding areas instead for the next days.

We went to the great pyramids of Giza on the same day. Before we left we walked along the streets in Cairo and watched the “Feast of Sacrifice” spectacle. The Feast of Sacrifice holidays are the highest Islamic public holidays and religious Muslims have to sacrifice an animal.  Therefore the anyway overcrowded city was additionally packed with sheeps, goats and cows standing at the roadside and all waiting to be killed. The animals were slaughtered one by one in the quite dirty streets in front of sightseers or people who wanted to buy meet. Blood flowed in streams down the roads. We don’t want to go into more details with regards to our vegetarian friends (Viktoria has not touched any meet since).

The Giza pyramids were a great experience, disregarding the annoying people who were trying to sell anything. We could not walk for two meters and felt like being persecuted all the time.

Unfortunately luck was not on our side on that day. Somebody broke into our hotel room in the evening while we were working on our computers in the hotel lobby. Our computer tablet and some cash money got stolen. Pity! We were very down at the beginning however that did not take very long. TIA (this is Africa). We heard from locals that the police have not been doing their job properly anymore since the revolution in Egypt and the crime is gradually increasing.

The next day we drove to Sakkara to see the step pyramid and the fascinating chamber tombs including the very well kept reliefs. The streets were almost empty, therefore relatively easy to drive. The public holidays must have at least one advantage for us!

The next days in Cairo we visited the Egyptian Museum and the Bazar El Kalili. The Egyptian Museum is packed with the most beautiful pieces of art from several epochs. Even though the presentation is very poor, the museum is a highlight.

Finally on Thursday, the 10th of November we received the Ethiopia visa within a record time of three hours. As it usually takes a minimum of one day we were asking the responsible person very nicely – and it worked. At noon we were back on the road again towards Al Fayyum to go to the desert freshwater lakes and to Wadi El Hitan. The vastness, cleanliness and silence of the desert were such a pleasure after buzzing Cairo. We were very impressed by finding very well kept whale and dinosaur bones in the middle of the dessert Wadi El Hitan. The Campsite is directly at the entrance of Wadi El Hitan  (GPS coordinates N29 15.842 E30 01.351). Nevertheless we spent the night at one of the lakes under the stars with pure enjoyable silence. From there we drove straight through the desert to the oasis Bawiti. The 60 km off-road driving is a dream not only for us but also for every off-road driver. In Bawiti we stayed at the Eden Garden Camp  (GPS coordinates N28 18.060 E28 56.393). It was a friendly, nice and clean place to stay. The oasis was very special because of the hot springs. Pleasingly hot mineral water bubbled everywhere – perfect to put the feed in or to take a relaxing bath.

On the way to the White Desert Julian took a bath in one of the oasis pump stations that was surrounded by an amazing desert panorama (GPS coordinates N28 02.057 E28 42.541). After the short bathing break we continued our way to the White Desert. The White Desert is outstandingly beautiful. Like an unreal dream is everything covered in pure unbelievably bright white. We have not seen something like that before. Our photos give a slight impression. In the middle of this white beauty we stayed in our favorite hotel “under the thousand stars” and enjoyed pesto, pasta, beer and campfire (GPS coordinates N27 15.764 E28 11.693). The next morning we continued our way to Luxor via the oasis Al-Farafra, Abu Minqar, Mut, Bala and Kharga. In Luxor we booked ourselves a hotel room at the Rezeiky Camp. (GPS Koordinaten N25 42.683 E32 38.919). This is an overlander hotspot with secure parking.

At this place we would like to mention that we are using the open street maps for Garmin for the Tracks4Africa. These two maps are a perfect combination for navigating. There are only some difficulties in Cairo when it comes to 3 streets on top of each other.

And further stories in our next blog…..