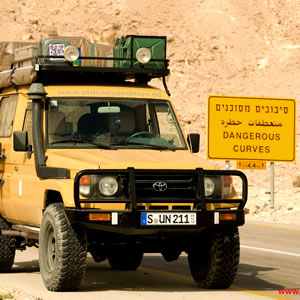 Looking back to our first week in Israel two things were remarkable for us. Firstly: apparently there are only public holidays and Shabbat days in Israel (or maybe we just were there at the wrong time). Secondly: The people in Israel appear to be insensitive to noises as well as they love to be continuously surrounded by loud music. You can also tell because they bring their muttering generators to the campsites.

Now one by one: We arrived on the 13th of October in Ashdod and it was a public holiday. Nobody was working and the entire port was deserted. At least the ladies and gentlemen from the immigration and police came to our cargo ship and examined us for hours. However at the end they told us that we are not able to leave the ship at least for another day not even without our car. We were not suffering too much to stay for another day because the ship has become some kind of home for us after one week. So we stayed on the ship together with the crew.

The next morning we drove happily and energetically with our car from the ship, but we were stopped at the customs all of a sudden.” Sorry, no one is working today because it is Friday, there was a public holiday yesterday and there is Shabbat tomorrow.” Great, we had to leave the car at the port for another two days. So we decided spontaneously to take the bus from Ashdod to Tel Aviv because we did not want to stay any longer in our new home. The bus drive was very pleasant however the bus terminal in Tel Aviv was just a mess. Tel Aviv has the worst bus terminal that has ever been created by a human being! We walked the last 4 km to Old Jaffa because we did not want to stay any minute longer in this disgusting building. Luckily we still got a room in the Old Jaffa Hostel. It is nicely situated next to the old Jaffa market and has a lovely terrace. In the afternoon we visited our cargo ship companions Tessa and Giora in their beautiful house in Old Jaffa. They have a fantastic terrace overlooking Tel Aviv and a view to the mountains of Jerusalem. When we were visiting them we realized that we will miss their daily stories about their life and their time in Israel.

Tel Aviv is a wonderful city and we really enjoyed ourselves. Nonetheless we had to get out our car from the port in Ashdod. Therefore, we were heading off to our agency Grimaldi Lines in Ashdod (Alaluv, GPS Koordinaten N 31,827 E 34,653) on the 16th of October very early in the morning. To get our car out of the customs we needed insurance for the car. So we tried for about two hours unsuccessfully getting the insurance. Unfortunately all insurance employees were on vacation because of the public holiday week. Before we were almost giving up, our agency recommended us to take some kind of a customs helper. His name was Chacho. Chacho was expensive (80 Euro!) however we really needed him because without him we would still be sitting at the port in Ashdod. Via his connections we got a vehicle insurance for one month within short. In addition he escorted us smoothly through all administrational port duties, e.g. customs, port agent, security, police, etc. etc. He even approached the managing director of the Ashdod port in order to convince him to get one last stamp for our departure. Unfortunately the responsible person for that only worked until 14:00 h because of the public holiday week! Finally at 17:30 h after another detailed check of our car we got out of the port.  At this place a big thank you to Chacho. Whenever someone needs support at the Ashod port with a vehicle, we really recommend getting in touch with Chacho no: +972-507206901.

In between just a quick note to the camping situation in Israel: Campers in Israel drive to the nature with minimum 20 plastic bags, foam mattresses and a generator. At their arrival the first thing they do is to put a plastic cover on the existing tables and turn on their muttering generators for their home fridge they brought with. Not to forget to switch on local music and bright halogen lights. Apparently only one type of camping tent in different sizes exists in Israel because every single one looks the same. No wonder that we were the center of happening with our car tent attached to our roof whenever we arrived at the camp grounds. People came to us and were asking astonishingly and even took photos from us and the spectacular car with the roof tent. We almost had the feeling that the people had never seen this kind of car roof tent before and we felt very exotic. However we had very nice conversations with the people. Surely we will not create any clichés , but camping in Israel is totally different to Europe or Africa.

Coming back to our trip we continued our journey to the north of Israel right at the Lebanon border. In Kfar Rosch HaNikra we took the cable car for 250 meters in order to see the caves at the chalk rocks. From there we went to the national park at the Sea of Galilee. We stayed one night in Ein Gev (this place is not recommendable – a lot of garbage and not very nice). The next day we drove to the Golan Hights to the Jordan springs in the northeast of Israel. Ein Panias is a wonderful place and was founded by the Greeks. There is one of the three Jordan springs that joins together with the two other springs and forms the Jordan River. The water pours in huge quantities just from the ground and is collected in antique water basins. After our sightseeing tour, we camped close to Ein Panias on a lovely camping ground directly at the Jordan river. (GPS Koordinaten N 33,2227 E 35,6118).

As we both knew Jerusalem already and it was impossible to get accommodations right at the spot (because of another public holiday at our arrival as well as Shabbat two days later) we decided spontaneously to skip Jerusalem and go directly to En Gedi.  We stayed directly at the dead see. And again, as soon as we arrived people came to us from all directions and asked us about our tent and our tour. We had some interesting conversations.

On the way to Eilat we stopped at the big crater at Negev desert in Mispe Ramon. It was really worthwhile to see. Especially our Toyota got the first time a sandy off-road tour. The night was freezing cold and windy; therefore we were heading off the next day to Eilat. Eilat is right in the South of Israel and reminds a little bit of Miami style beaches with tons of tourists. On the next day we were heading off to the Jordan border.

Altogether we can say that we really enjoyed travelling through Israel.

The highlights of our Israel-Tour were:

The travel blog from  Tanja und Cederic from Israel. (In German only)